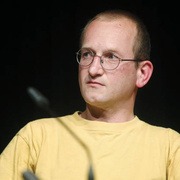 Tomaž Kosmač, born in 1965, lives between Idrija and Godovič, where most of his stories take place. He entered the Slovenian literary environment in 1987, when he published some short stories, which are still his primary form of creativity. He has published three collections of short stories: Driska (Diarrhoea; 1998), Žalostno, toda resnično (Sad, but True, 2001) and Punk is dead (2008). His stories have been included in several anthologies, such as Kronske priče: o mlajši slovenski prozi devetdesetih (The Key Witnesses: The Younger Slovene Prose at the Turn of the Millennia, 2001) and O čem govorimo (What We’re Talking About, 2004). He has also written the novels Hvalabogu (Thank God, 2006, written under the pseudonym Bogomir Hvala, 2006) and Varnost (Security, 2011).