The Dark Side of the Mountain. A Collection of Genre Short Stories 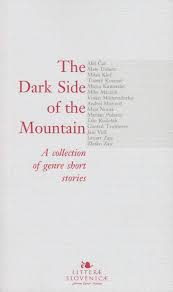 The main characteristics of Slovene postmodern narrative are plurality, heterogeneity and a flourishing of genre writing. The boundaries between ‘high’ and ‘low’ literature are being erased, while varieties of mass, popular or trivial literature are adopting a ‘high’ form and style. Genre writing is becoming established above all thanks to literary globalization, to which can be ascribed the appearance, since 1990, of authors who have successfully published science fiction, crime novels and novels with historical, espionage, horror or erotic-pornographic elements and themes. The selection of authors for this anthology is based primarily on the generic elements in their short stories, which cannot in most cases be characterized as “typical” genre short stories, as many are merely a parody or imitation of a genre, which testifies to certain postmodern procedures skillfully employed by authors to create a genre-type story. In some stories, there are apparent only fragments of generic elements, in others the emphasis is on stylistic generic imitation or on ironic literary strategies. This volume represents a selection of short stories which could roughly be labelled as genre, because they range from crime and science-fiction to vampire stories, some of them making expressively direct use of genre elements, at times even brutal eroticism that may in places come close to the pornographic description of sexuality.

The selection criterion for inclusion in this volume was above all the presence of genre elements, for pure genre stories are like the proverbial needle in the haystack in Slovenia, as there are very few writers here involved exclusively in genre prose. Thus, with the exception of Edo Rodošek, none of the presented authors is a writer of genre literature.

From the afterword by Irena Svetek

David Limon translates literature for children and adults from Slovene into English. His translations include the prize winning novels Fužinski bluz (Fužine Blues) by Andrej Skubic and Iqball hotel (Iqball Hotel)  by Boris Kolar, as well as five novels by the internationally recognised author Evald Flisar. He has also translated short stories or other works by a range of writers including Fran Levstik, Ivan Cankar, Janez Trdina, Vitomil Zupan, Mirana Likar Bajželj, Tadej Golob, Lenart Zajc, Jani Virk, Nina Kokelj, Jana Bauer, Janja Vidmar and Desa Muck. He is Associate Professor at the Department of Translation at the University of Ljubljana.

Maja Visenjak Limon is a translator. She studied Comparative Literature and English Language and Literature at the University of Ljubljana. Following her graduation, she moved to the UK with her British husband. Having completed a course in software programming she worked in a number of computer support and training posts in London. Maja began translating in 1997 and in 1998 moved back to Slovenia, where she has since worked as a freelance translator into English. Most of her published translations are of Miha Mazzini novels such as Operacija Cartier (The Cartier Project), Telesni čuvaj (Guarding Hanna), Kralj ropotajočih duhov (The King of the Rattling Spirits) and his short stories. Her other published literary translations include Maja Novak’s Mačja kuga (The Feline Plague), Janez Trdina’s Bajke in povesti o Gorjancih (Tales from the Gorjanci Hills), Slavko Pregelj’s Geniji v kratkih hlačah (Geniuses Without Pants), and Marko Sosič’s Balerina, balerina (Ballerina, Ballerina). Maja lives in Ljubljana with her husband David and daughter Anja.