The Key Witnesses: The Younger Slovene Prose at the Turn of the Millennia 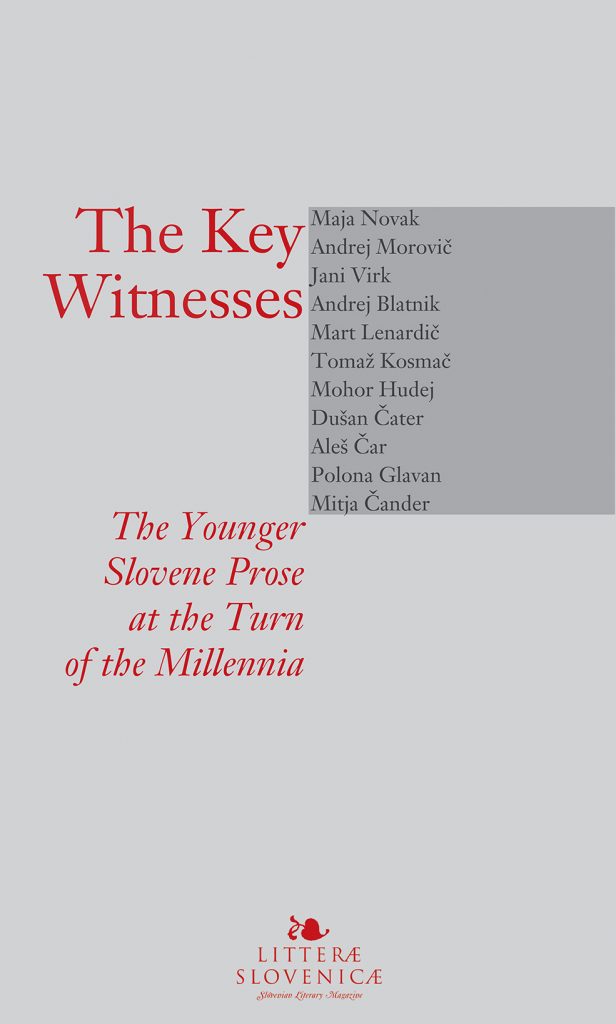 The fresh literary landscapes and stories woven by younger prose writers are leisurely told and with no wish to grasp the whole world by the point they make. The feeling that the society has become a phantom is responsible for a sort of narrowed narrative terrain. A writer represents only those spheres of the society that are within the range of his sight. In the past the whole structure of the society could be rightly guessed and the integral metaphor of the world could be formed only on the basis of a local pattern as one of the numerous prints of the global structure. This would seem utterly suspicious now. The more firmly the heroes of the nineties stand in the world, the more of the world escapes their field of vision. The world has become a thicket full of traps and surprises. And it is a kind of inborn blindness that seems to make the articulation of younger writers less metaphorical and more metonymical in its relation to reality.
From this point of view even the ever present literary themes are seen in a slightly different way. It seems there are no great tragedies, no absolute endings, no comprehensive enlightenments. Whenever a megalomaniac conclusion threatens to be made, the irony prevails. The latter, however, does not annihilate human feelings or knowledge. It just helps to ground them a bit and make them relative. One of the central if not the only focal theme of the narrative microcosms becomes love in its most different forms and stages: from a passionate fuck, a casual flirt, a fatal infatuation, a dull routine to tiresomeness, a depression, hatred and coldness. The importance of love themes proves a constant inclination towards and obsession with another person, it proves the fanatic search and pursuit of that person, which at times resembles rage and at times disinterested lingering. It seems that the highest form of personal freedom is born in affectionate embraces. Despite the changed social circumstances, the extent of freedom available is the same as it used to be, and the imperative of literary heroes is no smaller than it used to be. What seems to be changed in the new climatic conditions are the strategies of surrounding the freedom and the obstacles that need to be overcome. Dissipation, drugs, wild speeding, a night discussion, wanderings, violence, and dozens of other states could be the way to secure a patch of free land.
The young lions of the Slovene short prose have not started out of nothing. They were infected by the modernists with their hunger of freedom-diggers, and by the imperative to wholeheartedly inspect the themes poking at the labyrinths of the underskin landscapes. The ultramodernists and metafictionalists have contributed to the package by supplying their easy-going and unburdened attitudes. Therefore, we have got a dozen authentic narrative landscapes which will survive as top witnesses of the Slovene transition. These are testimonies which can be characterised as reckless, melancholic, resentful, rational, and neurotic.

From the afterword by Mitja Čander