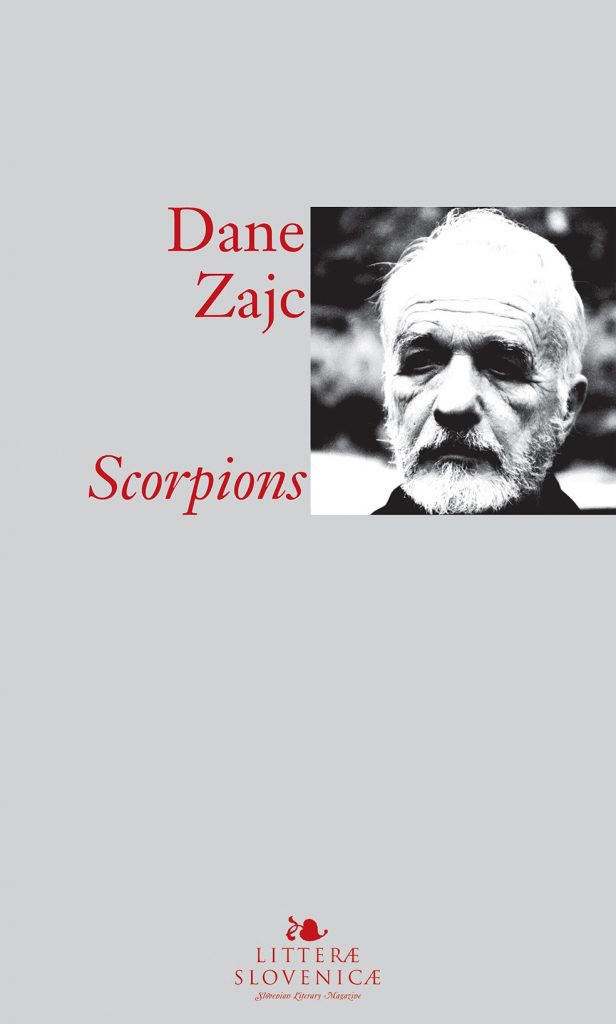 Dane Zajc belongs to the first post-war generation of poets who brought modernism to Slovene poetry. Sharing sentiments of a tense, sceptical and disillusioned worldview, they relinquished intimate testimony in lieu of an impersonal portrayal of reality on the charred ruins of the Second World War. On a formal level, their poetic expression broke grammatical rules, coalescing within free verse. This poet generation is remembered by the Slovene literary lore as the surrealists or neo-expressionists.
The lyrical world of Zajc is one of inescapable, constant duality and arising ever-incompletion, even antagonistic ambivalence – “a twofold void”, a twofold loneliness, a twofold language (one uttering, one mute). Though Dane, who was considered the most influential of Slovene modernists, is frequently portrayed as the “poet of existential dread, of despair and grim obsession with the suffering of man”, his verses sparkle with refined irony and bestial dark humour.
“Dane Zajc understands the paradoxes between the physical and the metaphysical the same way he understands the balance between pathos and the quotidian, between magic incantation and ironic, cold alienation. Zajc’s poetry does not entirely forego personal elements – a fallen partisan-brother, the mother figure – what remains central, though, is the natural landscape of things and his own “inability of expression”, making Zajc’s verse neither intimate confession nor propaganda. He consistently rejects political tendencies, any ideological engagement whatsoever, in fact, which – in the Communist era – won him the fame of a rebel poet”, writes Ilma Rakusa in her afterword to the Scorpions collection.

Dane Zajc, born 1929 in Zgornja Javoršica, Slovenia. Completed high school in Ljubljana, where, until his retirement, he worked as a librarian. Published his  first poems in the 1948/49 Mladinska revija and was later associated with other literary magazines (Beseda, Naša sodobnost, Revija 57, Perspektive, Problemi, Sodobnost, Nova revija). During the years 1991–95 he was President of the Slovenian Writers’ Association. He was a member of the Slovenian Academy of Sciences and Arts and winner of many awards, including the national Prešeren Prize for literature.

END_OF_DOCUMENT_TOKEN_TO_BE_REPLACED

Pogačnik’s academic work focusses on French word formation, French-Slovenian comparative grammar, semantics, literary writing and translation. He has been involved in numerous research projects and programmes. He is a co-author of the textbook Parlons slovène, which was published in Paris. He has also published three editions of his French-language translations of Prešeren’s A Wreath of Sonnets. For many years (1977–1982), he was editor-in-chief of Vestnik, an academic journal for foreign languages and literature. He chaired the national curriculum commission for the French language (1997–1999) and reviewed various secondary and primary school curricula and textbooks. He prepared a televised French language course (RTV, 1987).

He has been decorated by the French government as a Knight (1996) and an Officer of the Order of Academic Palms (2007), and in 1993 he also received a special recognition from the National and University Library in Ljubljana for the acquisition of Tesnière’s manuscripts Les Formes du duel en slovène and the accompanying Atlas.

Lili Potpara was born on 3 October 1965 in Maribor, Slovenia. She studied English and French at the Faculty of Arts, University of Ljubljana, and graduated in English Translation Workshop in 1992. Potpara translates from Slovene into English, and from English, Serbian and Turkish into Slovene. During her career as free-lance translator she has translated works of Slovenian authors into English, including a number of Drago Jančar’s short stories collected in the book Joyce’s Pupil (Dublin: Brandon, 2006), and a vast volume of fiction works from English into Slovene published by major Slovenian publishing houses, among them Cormac McCarthy’s The Road (Cesta; Ljubljana: Mladinska knjiga, 2008), Michael Chabon’s The Yiddish Policemen’s Union (Židovski policijski sindikat; Ljubljana: Mladinska knjiga, 2009) and Stuart Evers’ Ten Stories about Smoking (Deset zgodb o kajenju; Ljubljana: Modrijan, 2014) as well as non-fiction books, most notably Siddhartha’s Mukherjee’s Emperor of All Maladies (Kralj vseh bolezni; Ljubljana: Modrijan, 2012).
Her own short stories were published in two collections (Zgodbe na dušek; Ljubljana: LUD Literatura, 2002, and Prosim, preberi; Ljubljana: LUD Literatura, 2006). In English translation, her short pieces have appeared in World Literature Today and Fiction Southeast, among others, most recently in the anthology Flash Fiction International (New York, London: Norton, 2015, translation by Kristina Reardon).

Translator and academic editor Zdenka Štimac was born in 1963 in France. She began her career in translation (transposing Slovene prose, poetry and drama into French: France Bevk, Alojz Rebula, Brina Svit, Dane Zajc, Drago Jančar…) for the Paris publishers Cerf and Gallimard, among others. Having graduated from the French School of Language Editing, she worked in the profession for a decade with various newspapers and publishing houses. In 2013 she established her own house, the Editions Franco-Slovènes & Cie, which published several of her translations: poetry by Tomaž Šalamun, prose by Trieste-based writer Marko Sosič, and the folk legend Martin Krpan, a national classic by Fran Levstik. Two more of Zdenka Štimac’s translations are set for release; Svetlana Makarovič’s pointy pamphlet Fuckin’ Smokers and Marko Sosič’s short story collection Iz zemlje in sanj (Of Soil and Dream).