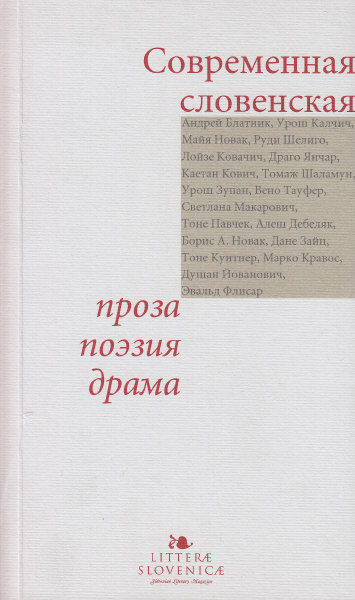 Contemporary Slovene Prose, Poetry and Drama, the first anthology of Slovene literature to appear in Russia in the 21st century, presents the Russian readership and everyone speaking the language (some 300 million people) with the art of independent Slovenia’s leading poets, writers and dramatists. The idea behind it sprang up at the Slovene Writers’ Association in the mid-90s when it was led by poet Dane Zajc, coming to fruition in the mandate of writer and dramatist Evald Flisar. The anthology thus features works of nineteen Slovene authors active during that period, represented by noted members of several of our literary generations. Prose offers the stories of Andrej Blatnik, Uroš Kalčič, Maja Novak, Rudi Šeligo, Lojze Kovačič and Drago Jančar, and poetry the poems of Kajetan Kovič, Tomaž Šalamun, Uroš Zupan, Veno Taufer, Svetlana Makarovič, Tone Pavček, Aleš Debeljak, Boris A. Novak, Dane Zajc, Tone Kuntner and Marko Kravos. Slovene drama is represented by passages from works by Dušan Jovanović, Drago Jančar and Evald Flisar. The project was translated by esteemed Russian Slovenists such as Maja Ryzhova, Galina Zamjatina (under the pseudonym Anna Sudjina), Zhanna Perkovskaya, Viktor Sonjkin and Nadezhda Starikova (under the pseudonym Boris Art). The anthology also includes two poems by Svetlana Makarovič translated by the poet Marina Virta, Countdown Song and Sunflowers, which already appeared in the edition Poetry of Slovenia. XX. Century (1989). On the Russian end, the project was coordinated by Slovenist and lecturer Nadezhda Starikova who compiled the bio-bibliographies of the represented authors and edited the Russian translations.