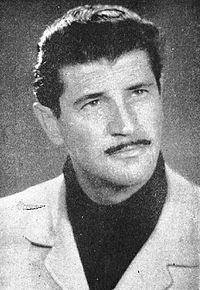 The Slovenian writer, poet, playwright and essayist Vitomil Zupan was born in 1914 in Ljubljana, where he later attended high school and studied civil engineering. Considered something of a bohemian, in his younger years he travelled extensively and worked at a variety of jobs, including as a professional boxer and a constructor of lightning rods. On returning to Slovenia, he allied himself with the leftists in the student movement and joined the Liberation Front as a member of the Sokol association. In 1942 the Italian occupiers interned him in the Čiginj and the Gonars concentration camps, though he escaped and joined the partisans. After the war he was editor of the cultural program on Radio Ljubljana. In 1947 he received the Prešeren Prize for his 1945 play Rojstvo v nevihti (Birth in a storm). A year later, however, he was imprisoned and forbidden to write – having been accused of immorality, of revealing state secrets, and of producing hostile propaganda. While in prison he wrote the novel Levitan (Leviathan; 1982). He was released in 1954. In prison he also wrote a number of poems that were published some 20 years after his death in the 2006 collection Pesmi iz zapora (Prison poems). After he was released from prison, Zupan worked as a freelance writer. Many of his short prose works were published in newspapers under pseudonyms. Though he also wrote several radio and television plays and film scripts, it would be many years before his works were published. Not until forty years after their creation were his plays performed. In 1984 he received the Prešeren Prize for his literary oeuvre. In 1987 he died in Ljubljana, where he is buried in Žale Cemetery.