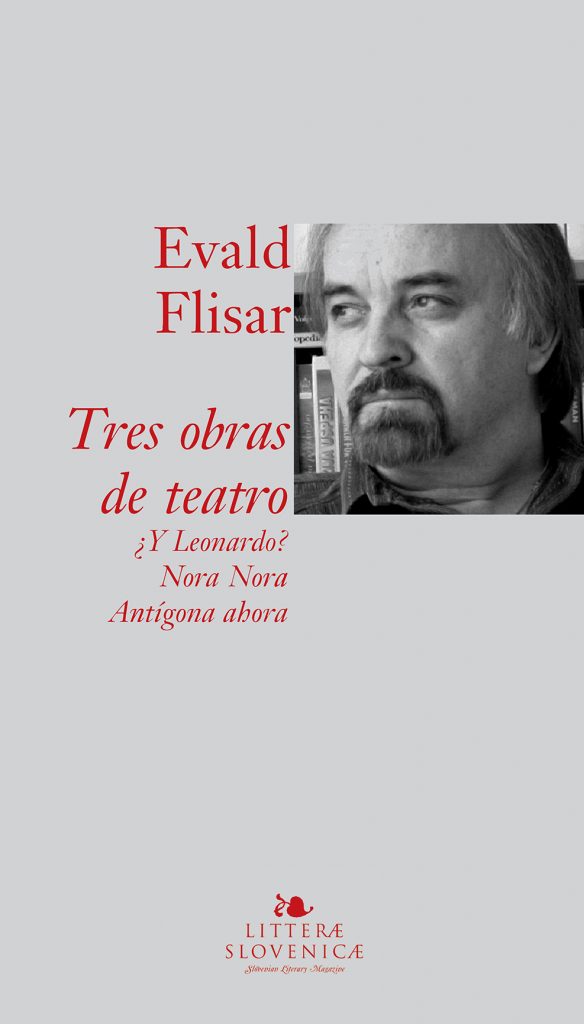 Evald Flisar is one of the few Slovenian authors to have truly succeeded in making a breakthrough abroad. Not only that, it seems that Flisar, the author of fifteen plays and the most internationally-successful Slovenian playwright, is much more valued abroad than in his homeland: to date there have been 93 performances of his plays on professional stages on almost all the continents. He is the first (and so far the only) Slovenian playwright whose work has been performed in Islandic, Arabic, Bengali, Indonesian, Japanese, Chinese, and Belarussian. The book Tres obras de teatro (Three plays) brings together three representative Flisar plays – What about Leonardo?, Nora Nora, and Antigone Now – in Marjeta Drobnič’s Spanish translation. Also noteworthy is the foreword to the book: Jana Bauer’s portrait of the author is a creative collage of selected quotations about Flisar’s work.

Evald Flisar was born in 1945 in Slovenia. Novelist, playwright, essayist, editor and globe-trotter who has travelled in 96 countries; underground train driver in Sydney; editor of (among other publications) an encyclopaedia of science and inventions in London; author of short stories and radio plays for the BBC, president of the Slovene Writers’ Association (1995–2002); since 1998 editor of Sodobnost (Contemporary Review), the oldest Slovenian literary journal; and since April 2015 President of the Slovene PEN Centre. Author of 13 novels (nine of them short-listed for the Kresnik Prize, the Slovenian “Booker”), two collections of short stories, three travelogues, two books for children, and fifteen plays (eight of which were nominated for the Best Play of the Year Award, which he won three times). Recipient of the Prešeren Foundation Prize, the highest state award for prose and drama, as well as of the prestigious Župančič Award for lifetime achievement. Various works translated into 36 languages, among them, Bengali, Hindi, Malay, Nepalese, Indonesian, Turkish, Greek, Japanese, Chinese, Arabic, Czech, Albanian, Lithuanian, Icelandic, Romanian, Amharic, Russian, English, German, Italian, Polish and Spanish. His plays are regularly performed all over the world, most recently in Austria, Egypt, India (three different productions in two months), Indonesia, Japan, Taiwan, Serbia, Bosnia, Bulgaria, Belarus and the United States. He has given more than 50 literary readings and festivals on almost all the continents. He lived abroad for 20 years (three years in Australia, 17 years in London). Since 1990, he has been a resident of Ljubljana, Slovenia. His novel My Father’s Dreams, published by Texture Press in 2005 and recently by Istros Books in London, UK, earned him a place at European Literature Night, an annual British Library event that features six of the leading contemporary European writers. Another of his novels, On the Gold Coast (published in English by Sampark, Kolkata, India), was nominated for the most prestigious European literary prize, the Dublin IMPAC International Literary Award. It was listed by The Irish Times as one of 13 best novels about Africa written by Europeans, alongside novels by Joseph Conrad, Graham Greene, Isak Dinesen, JG Ballard, Bruce Chatwin and other great literary names. In June/July 2015 Flisar completed a three-week literary tour of the United States, reading at the Library of Congress in Washington and at the Slovenian Union of America convention in Chicago, attending a performance of his play Antigone Now at the Atlas Performing Arts Center in Washington, speaking at the Slovenian Permanent Mission at the United Nations, etc.