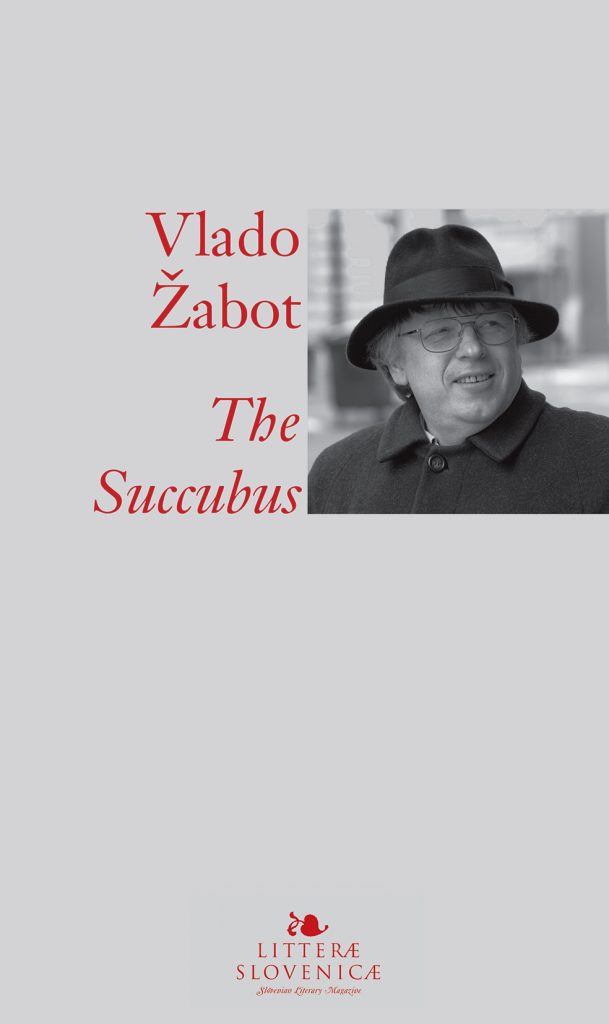 In The Succubus, Vlado Žabot, one of the most prominent Slovenian novelists previously has employed his distinct prose style to construct distant, remote, and swampy atmospheres, pursues a contemporary urban story. The events take place in a large-city environment where a murder occurs, though in fact the murder occurs above all in mind of the main character. It is a novel in which, from chapter to chapter, the protagonist, a dull pensioner named Valent Kosmin, drives the last nail into his coffin. Valent suffers from paranoia. Before the appearance of Valent’s mental illness, the first segments of the story are reminiscent of the standard introduction to a detective novel. The setting is a prestigious part of the city, one of the villas near the a restaurant called Little Paradise to which the protagonist goes each day, emerging from his den in a socialist apartment building, for a bottle of burgundy wine. One day the corpse of the wealthy owner of the restaurant is found. This event triggers in Valent a spell of paranoia that at first manifests itself only in the fear that he regards everyone in his enviroment, from the taxi driver to his own waiter, with suspicion, but eventually grows into increasing distrust and hallucinations.

The Succubus is a novel that pulls in both the demanding literary reader and indeed all readers who are attracted by mythological and psychological themes.

Edited by: Lela B. Njatin

Vlado Žabot was born in Šafarsko in 1958. He obtained a degree in comparative literature and Slovenian language at the Faculty of Arts in Ljubljana. For a short while, he had worked as a journalist before he chose the profession of a writer. As the President of the Slovene Writers Association and the President of the Slovenian Programme Council of the Forum of Slavic Cultures, he achieved significant results that benefited Slovenian authors, among others: the introduction of the public lending right, founding of the Slovenian Book Agency (JAK), the compilation of a representative international literary collection 100 Slavic novels. In addition, he was also the initiator and organizer of the literary Kresnik Award, which has significantly influenced promotion and development of the Slovenian novel in the past 25 years.
His novels Stari pil (The Old Pillar, 1989), Pastorala (The Pastoral, 1994), Volčje noči (Nights of the Wolf, 1996), Nimfa (The Nymph, 1999), Sukub (The Succubus, 2003), and Ljudstvo lunja (The People’s Harriers, 2010) make him among the most important contemporary Slovenian authors. Žabot has received many international and domestic nominations, recognitions, and awards, among those the Kresnik Award and the Prešeren Fund Prize. Some of his works have been included in course reading for Slovenian and foreign universities. His novels have been translated into Croatian, Russian, Spanish, Serbian, Macedonian, Ukrainian, Polish, German and English. In 2016, the renowned New York Public Library included his novel The Succubus, especially renowned in the US, in Olympic Reading: 188 Authors from around the World, a representative international list.
Žabot also authored two books for children and the first Slovenian epic in the dactylic hexameter, Sveta poroka (Holy Wedding, 2013). His work is highlighted in many Slovenian and international expert studies, as well as in encyclopaedias and anthologies.

END_OF_DOCUMENT_TOKEN_TO_BE_REPLACED

David Limon translates literature for children and adults from Slovene into English. His translations include the prize winning novels Fužinski bluz (Fužine Blues) by Andrej Skubic and Iqball hotel (Iqball Hotel)  by Boris Kolar, as well as five novels by the internationally recognised author Evald Flisar. He has also translated short stories or other works by a range of writers including Fran Levstik, Ivan Cankar, Janez Trdina, Vitomil Zupan, Mirana Likar Bajželj, Tadej Golob, Lenart Zajc, Jani Virk, Nina Kokelj, Jana Bauer, Janja Vidmar and Desa Muck. He is Associate Professor at the Department of Translation at the University of Ljubljana.