The Slovenian Essay of the Nineties 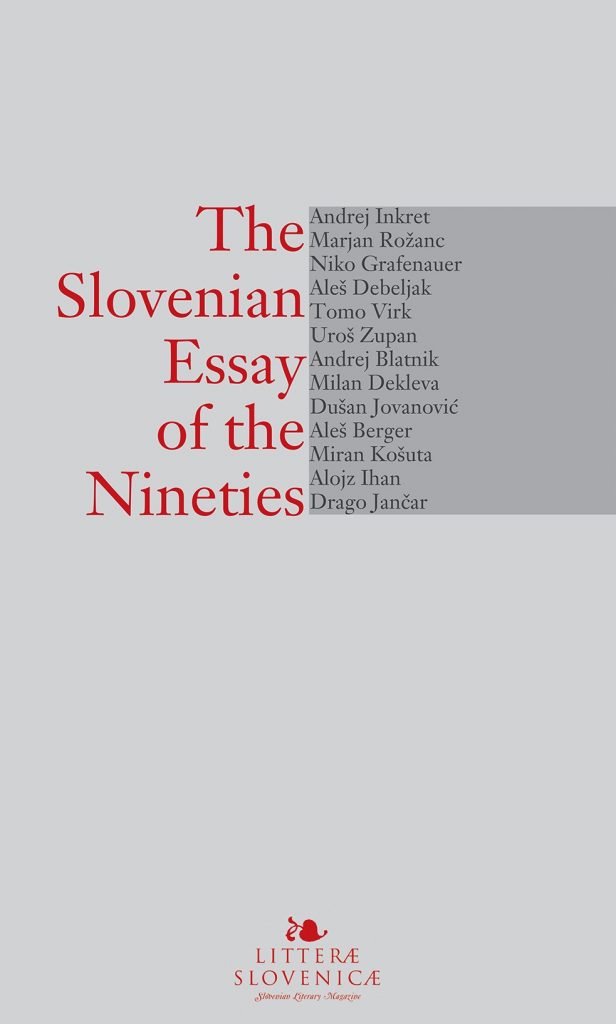 The selector of the texts included in The Slovenian Essay of the Nineties primary had to consider three things:  firstly, the “target audience” of the selection, i.e. non-Slovenian readers and their – presumed – interest in Slovenian literature and culture, secondly, the temporal aspect, which determined the selection, since most of the essays were written in the nineties and thirdly, the upper criterion, strict selection. […] The thirteen authors included in the anthology imply thirteen different, quiet individual styles depicting as many different individual realities. Even though the selection is limited primarily to texts created in the last decade of the twentieth century, the authors included belong to different generations and hold different literary-aesthetics, ideological and other beliefs and opinions and, finally, have different personal experiences, co-created by the unpredictable dialectic of existence and history, the individual and the national, freedom and obligation. Let me also mention that this dialectic was extremely complex in Central Europe, of which Slovenia is a part in terms of both geography as well as culture and history. […] Some texts included are on the border of professional discussion, others closer to poetic meditation or, formally speaking, diary entries. The topics treated are also very varied, ranging from cultural-political reflection, general thoughts about the nature of Slovenian literature, its historic turning points and topical creative dilemmas, to particular questions not necessary related to the sphere of national literature in the widest sense of the word, but revealing the authors’ individual inclinations.

From the book’s cover by Matevž Kos