Ten Slovenian Poets of the Nineties 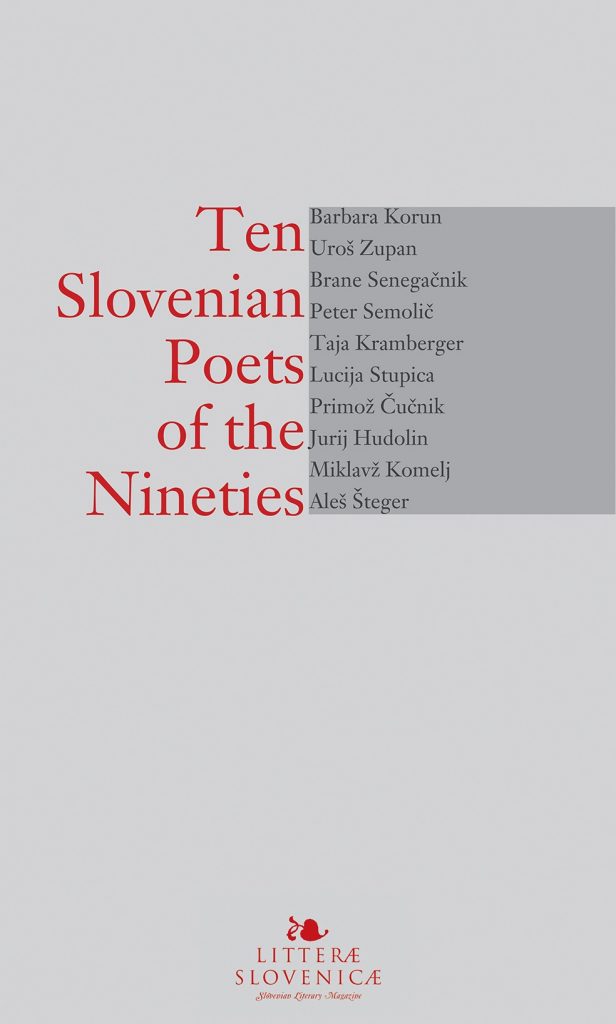 The anthology presents the poetry of ten Slovenian poets who first appeared in the poetic arena in the nineties, and whose books (or just a single one) published so far foretell that they will be heard of in the first decades of the 21st century as well. We are talking about the poets who spent their early childhood during the disintegrating socialism and in their youth watched it collapse; when they grew up, the world around them had already changed. Admittedly, the year 1991 in Slovenia did not mark the beginning of a new counting of the years, especially not in poetry, and yet the external circumstances do have a specific internal signification, which is also reflected in the poetry of the above-mentioned generation – the first which matured in the new social and political situation or just before it emerged. The point is not only that Slovenia had moved away from the former Yugoslav federation and its cultural context, and entered into globalization flows; another thing that radically changed was the awareness of one’s own position in the world.
And another thing: this is probably the first generation which learnt an equal or even larger share from foreign poets than from Slovenian ones. The ten poets we are presenting here are related to the “old” Slovenian cultural story by a single, yet determining – the national language. This classification of lyrical interests among the younger generation means only that Slovenian poetry – regarding the immense internal force it demonstrated through truly great poetic names quite comparable to the great names in contemporary European poetic arenas (although, sadly, pressed into the relatively anonymous logic of “small” national languages) – found itself in the most natural creative position, after a century and a half, and after the end of big universal stories. From the dis-centered world, this poetry is gravitating towards individual aesthetic centres represented by concrete names. We have selected (only) ten of them, but it needs to be stressed that around two hundred books of poetry are published in Slovenia every year, a third of which definitely deserve attention, and a tenth of which belong to elite production.

From the afterword by Peter Kolšek