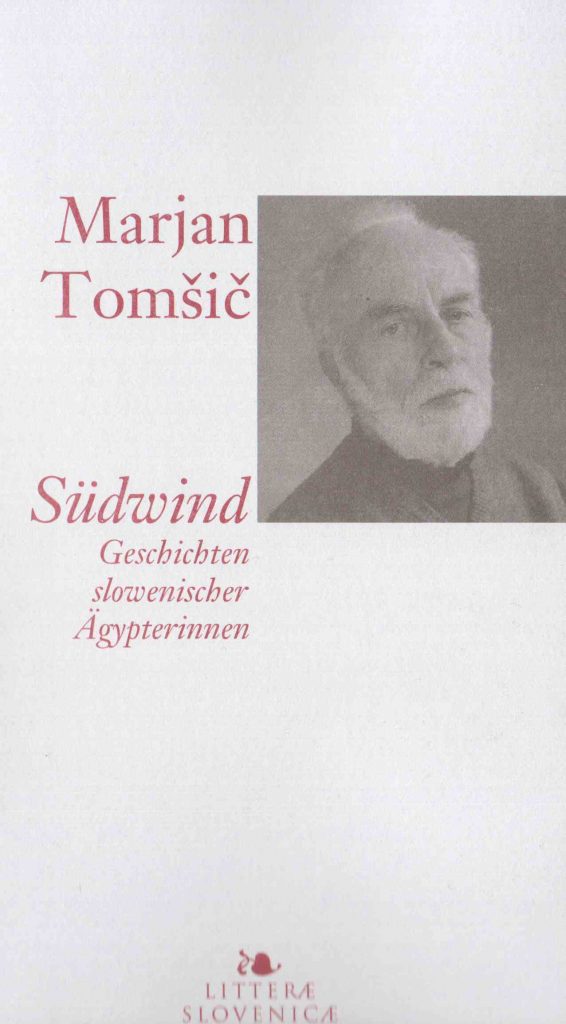 In addition to Tomšič’s “Istrian work” there is, anchored in his prose as a central character, the image of the energetic and strong woman who is often subjected to the harsh trials of life but who, precisely in exceptional situations, acquits herself well. […] However, if in Tomšič’s prose of the 1990s the key female figure is a young rural woman who travels to the big town to sell home-grown produce and eggs […], in the novel Grenko morje (Bitter sea, 2002), as well as in its “sequel” novellas collected in Južni veter (Southwind, 2006), this role is taken over by “Aleksandrinke.” These were women from the Gorizia region who made their way to Egypt to work as wet-nurses, nannies, cooks, etc., for wealthy families there.

On the one hand their fate was certainly tragic, since to earn money they were compelled to leave behind their infant children and husbands – some never to return (and their tragic destiny is masterfully articulated by Tomšič in Bitter sea). And yet, on the other hand, there were also some who had clearly opted for another type of life and who, therefore, cast off old ways and patterns. They were propelled by a deep desire for a free, unencumbered way of life. They were world travellers, cosmopolitans of sort who, bedecked with courage and ingenuity, travelled the world by steamship, without knowledge of foreign languages, without adequate education or culture. Eventually they became real ladies and versant in many languages. They went to the movies, some even to the theatre and to other cultural events. In other words, they became universally well-informed, living windows to the world, so to speak. […] It is to these somewhat less tragic figures that Tomšič devotes his detailed literary attention in the poetically resonant Southwind, a collection of stories which was shortlisted for the Fabula prize for the best Slovenian short story collection.

Marjan Tomsic (b. 1939 in Rače by Maribor) is one of the key names in contemporary Slovenian fiction and one of the most creative Slovenian writers of the last third of the 20th century – a fact that, especially on account of his extensive dream chronicle published in the Romanesque trilogy Uroki polne lune (Spells of the full moon), holds true also for the first decade of the new millennium. His prose is varied and diverse in terms of both theme and genre (he writes everything from novels, short stories, vignettes, sketches, humoresques, to works for youth, while also writing for the theatre and penning radio plays). At first, he was greatly attracted to science fiction, and even more to dream fiction. He wove elements of these already into his story “Krog v krogu” (A circle in a circle), a satiric text from 1968, and they especially flourished in Onstran (The beyond), his 1980 collection of fantastic tales.

END_OF_DOCUMENT_TOKEN_TO_BE_REPLACED

Daniela Kocmut, born 1980 in Maribor. She went to primary school in Maribor and Šmohor/Hermagor in Austrian Carinthia, where she also graduated from secondary school. She studied Translation Studies and Interpreting in Graz and Dublin. She is a translator and proof-reader for German and Slovenian, and she also teaches Slovenian evening classes for adults at the University of Graz. She stages literary evenings with Slovenian and Austrian authors and writes poetry. She has translated works by Slovenian authors such as Drago Jančar, Maruša Krese, Milan Dekleva, Stanka Hrastelj and Katarina Marinčič.

Metka Wakounig (b. 1983) grew up bilingually in Kärnten/Koroška and studied Translation Studies and German in Graz and Bristol. She works as a freelance translator and proof-reader, as well as in publishing. She has translated works by a number Slovenian authors, among them, Marjan Rožanc, Boris Pahor, Marjan Tomšič, Nataša Kramberger and Katja Perat. In addition to that, she has published short stories, including the collection Wien schön trinken (2013, the Milena publishing house). Metka Wakounig lives and works in Vienna.