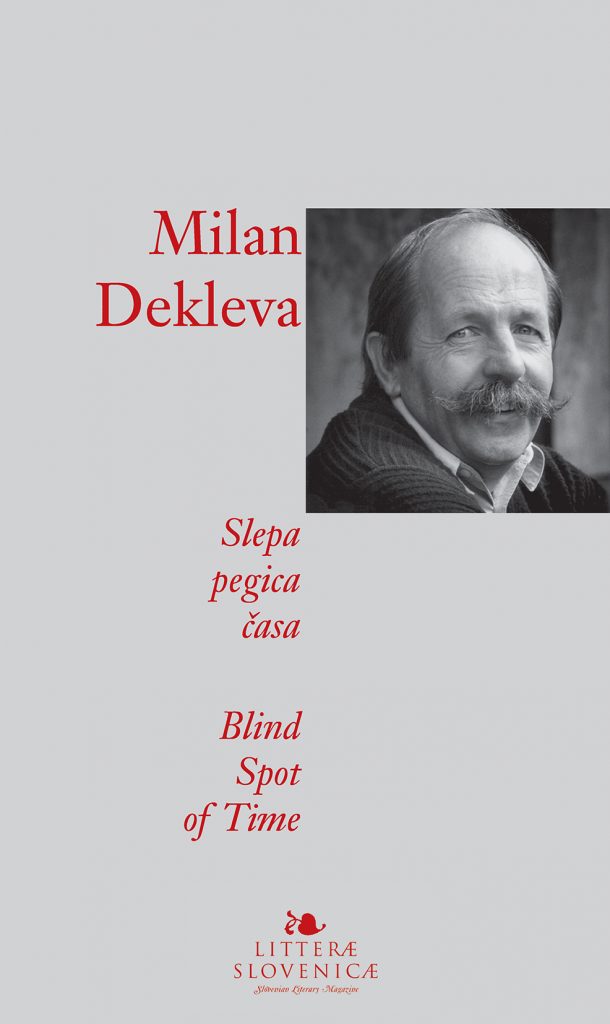 “The poem is controlled silence”, wrote Milan Dekleva in his 1990s collection Preseženi človek (Out-lived man). This poetic paradox, that has existed from the very beginning of Dekleva’s writings and persisted through the three and a half decades of his experimentation in various genres and linguistic situations (including not only fourteen books of poetry but also prose fiction, plays and essays) and indeed remains today, did not emerge from nothing.

Dekleva’s story is also the story of poetic modernity as it lurks within the metamorphosis of world and Slovenian literature. Dekleva’s dialogue with modernity remains a creative conflict with his ancestors, the battle of the poet for self-recognition, for the word that will articulate the uniqueness of his world. What is central to Dekleva’s texts – and this can only be said with the benefit of hindsight – also corresponds with the spatial-temporal coordinates of their emergence: with the conceptual-aesthetic, and perhaps even with the ideological-political, conditions of the decades following the Second World War, which is to say through the filter of the poet’s individual reason, gaze, and desire. The transition from the 1960s to the 1970s was not only a period that marked the beginning of Dekleva’s poetic formation, but also a period of turbulent social happenings, dramatic debates and actions. Dekleva is the poet of the “disenchanted world” and is thus linked to “the twilight of the idols” in which not even the Word of the poet, understood in the old metaphysical way, has been spared.

Milan Dekleva was born in 1946 in Ljubljana, Slovenia. He graduated in Comparative Literature and Literary Theory from the University of Ljubljana. He worked as an editor at RTV Slovenia and has worked as a journalist at Radio Študent, the Dnevnik and Tribuna newspapers in the past, while also collaborating with numerous Slovenian cultural organizations. Dekleva is a man of many talents, though he is best known as a man of letters, particularly as a poet, playwright, author of children’s stories, dramatist, and scriptwriter. He published twenty volumes of poetry, starting with Mushi mushi in 1971 and going on to Uglaševanje molka (Tuning silence, 2013), six novels – winning the 2006 Kresnik Award for the best Slovenian novel of the year for Zmagoslavje podgan (The Triumph of the Rats, 2005), two collections of short stories (Reševalec ptic (The Bird Rescuer, 1999) and Izkušnje z daljavo (Experiences with Distance, 2006), and two collections of essays, Gnezda in katedrale (Nests and Cathedrals, 1997) – awarded with the Rožanc Award for best book of essays, and O trnu in roži (About the Thorn and the Rose, 2002)). In addition to his literary achievements, Dekleva is also known as a rugby and water polo player (over 300 matches), a member of the Slovenian music band Salamander, and a theatre music composer.  His literary endeavours have won him numerous awards, among them the Jenko Award (1990), the Župančič Award (1995) and the Veronika Award (2008) for poetry, the Rožanc Award (1999) for the best book of essays, the Kresnik Award, the Prešeren Fund Award (1999), and the Prešeren Lifetime Achievement Award (2006).