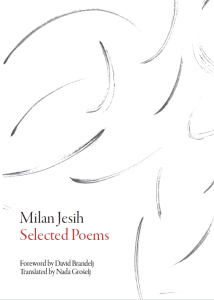 A postmodern poet who successfully employed classic structures to exploit the range of possibilities inherent in the Slovenian language, this selection from the life’s work of Milan Jesih highlights his revolutionary approach to verse. Beginning with humor and autobiography and gradually withdrawing into a universe of fragments, quotations, dreams, and doubt, this collection offers English readers a first glimpse into the work of one of Slovenia’s literary treasures.

END_OF_DOCUMENT_TOKEN_TO_BE_REPLACED

Nada Marija Grošelj (BA in English and Latin, PhD in linguistics) has been registered since 2005 as a freelance translator. She teaches at the University of Ljubljana, Slovenia, on contract, and works with academic institutions as a translator and language consultant for English. She translates from English, Latin and Swedish (occasionally also from Ancient Greek) into Slovene, and from Slovene into English. Her book-format translations (51 so far, with several more forthcoming) include the fields of literary theory, philosophy, theology, mythology, and prose and poetry. Several of her translations into Slovene have won national translation awards. Her translations of Slovene literature into English have been included in the Litterae Slovenicae and Vilenica series, in an English-language anthology of Slovene literature (The Soul of Slovenia, 2013), and in the editions of four Slovene poets: France Prešeren (2008) and Tone Pavček (2009) with co-translators, and Jože Snoj (2013) and Milan Jesih (2015) as sole translator. Her translation of Veronika Simoniti’s selected short stories is scheduled for publication in 2017 at the Dalkey Archive Press, Illinois, USA.