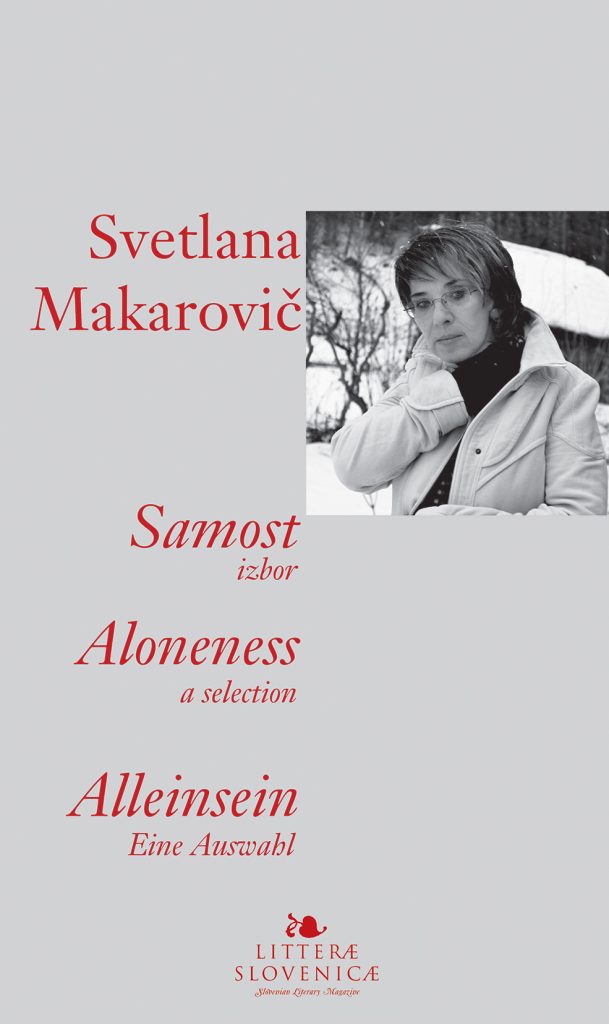 Svetlana Makarovič draws extensively on folklore, especially on balladic poetry. She developed this resource in a distinctly individual fashion by faithfully maintaining the rhythm and lexis of the traditional ballad; her heartbreaking ballads speak of the dehumanized nature of the modern world.

Through her poetry, Svetlana Makarovič brings to life many beings from Slovenian mythology that had been more or less consigned to the attic of collective oblivion: desetnica (the tenth daughter), kresnik (the summer solstice bonfire spirit), the spring-announcing deity of Zeleni Jurij (‘Green George’), Pehtra (the witch or sorceress), sojenice (the Fates), škopnik (the night spirit), and so on.

The pan-European dimension of her work is valid not only at the formal level but also with respect to the artistic worth of her poetry: as the structures of Makarovič’s ballads connect Slovenian heritage with the traditions of other European nations, so, too, does her artistic vision grow from a Slovenian vision of the world, transcending it into a universal account of human destiny. Svetlana Makarovič is a great European, as well as a Slovenian, poet.

Svetlana Makarovič was born in 1939 in Maribor and started her career as a professional stage actress. Today she is a professional writer, poet, and one of the best-known Slovenian authoresses. Her poetry is traditional rather than avant-garde. The curiosity of her poetry lies in paraphrasing the motives and the tone of Slovenian folk poems, as well as in creating an obscure, balladic atmosphere. Her poems range from free to fixed forms. She has published several books of poetry: Somrak (Twilight, 1967), Kresna noč (The Midsummer Night, 1968), Volčje jagode (The Deadly Nightshades, 1972), Srčevec (The Heart Potion, 1973), Pelin žena (The Wormwood Woman, 1974), Sosed gora (Neighbour Mountain, 1980) and other. Makarovič is a relevant author for the younger generations: Pekarna Mišmaš (The Mišmaš bakery), Sapramiška (Sapramouse) ect. She has published more than thirty books and fifteen plays for children. She has received a number of awards for her work, among them the Prešeren Fund Prize for the poetry collection Vojskin čas (Time of War, 1976), the Jenko Prize for the poetry collection Tisti čas (That Time, 1994); she made the 1994 IBBY Honour List, received a Victor Award for lifetime achievemetn (2002), The Golden Order for Merits of the Republic of Slovenia, the Levstik award for lifetime achievement (2011) and the Zlatnik poetry award (2012). In 2000 she refused the largest national award Prešeren Prize. Her works have been translated into a number of foreign languages. The poet and comparative literature professor Boris A. Novak wrote of her: “Svetlana Makarovič is, by common consensus, the ‘first lady’ of modern Slovenian poetry. She is a complex, artistic personality, the author of an exquisite and expressively powerful poetry opus. If she wrote in a language with a ‘greater diffusion,’ she would undoubtedly rank among the leading names in European poetry of recent decades.”

END_OF_DOCUMENT_TOKEN_TO_BE_REPLACED

Ludwig Hartinger was born in 1952 in Saalfelden am Steinernen Meer in Austria. The poet, translator into Slovenian and French, writer, editor, and publisher has been bringing Slovenian literature closer to the German speaking reader for more than two decades. He lives and works in Ljubljana, Salzburg, and the Karst region of Slovenia. His love for Slovenian sprung from the verses of Srečko Kosovel. He has been publishing the “RanitzDrucke” book series since 1995, and he also works as an editor for the Otto-Müller-Verlag publishing house as well as a co-editor of the Literatur und Kritik literary magazine. A smooth “word smuggler,” he publishes his essays in German and his poetry in Slovenian. His works include translations of Slovenian poetry into German, such as Im Schatten der Worte (In the Shadow of Words, 1998), Das Wasser spricht (Water speaks, 2000), translations of assorted poetry by Srečko Kosovel Mein Gedicht ist Karst (My Poem is Karst, 1994) and Mein Gedicht ist mein Gesicht (My Poem is my Face, 2004), a biography about the Austrian artist and publisher Christian Thanhäuser, Der LinienStifter (The Donor of Lines, 2005), and a book of poetry in Slovenian entitled Ostrina bilk (The Sharpness of the Straws, 2006). He and Aleš Berger have edited three monographs of previously unpublished works by Srečko Kosovel: Ikarjev sen (Icaruses Dream, 2004), Izbrana pisma (Selcted Letters, 2006) and Izbrana proza (Selected Prose, 2008). His intercultural endeavours have won him the Central-European-Initiative-Prize (2004) and the Pretnar Award (2004) for his contributions as an international ambassador of the Slovenian language and its literature.

Alan McConnell Duff was born in 1942 in Ireland. He spent his childhood in South Africa, but left for England after high school to attend the University of Cambridge. As a freelance writer and translator, he worked primarily in France, the former Yugoslavia, India, and, after 1991, in Slovenia. He wrote several radio plays and books on translating and teaching English. He published more than twenty short stories, which have been translated into French, Hungarian, Spanish and Slovenian. His massive translation opus spans many areas, including: literature, history, natural and cultural heritage, art, photography, contemporary Slovenian drama, and science. He translated such famous Slovenian authors as Boris A. Novak, Ivo Svetina, Evald Flisar, Drago Jančar, Josip Osti, Svetlana Makarovič, and others. He also translated Miroslav Krleža, Aleksandar Popović and Goran Stefanovski. He received the prestigious Duke of Edinburgh’s Award, The Society of Authors’ Tom-Gallon Trust Award for his short story “The Comrades Marathon,” and the Trubar Foundation Award for his literary translations. He died in 2012 in Ljubljana.