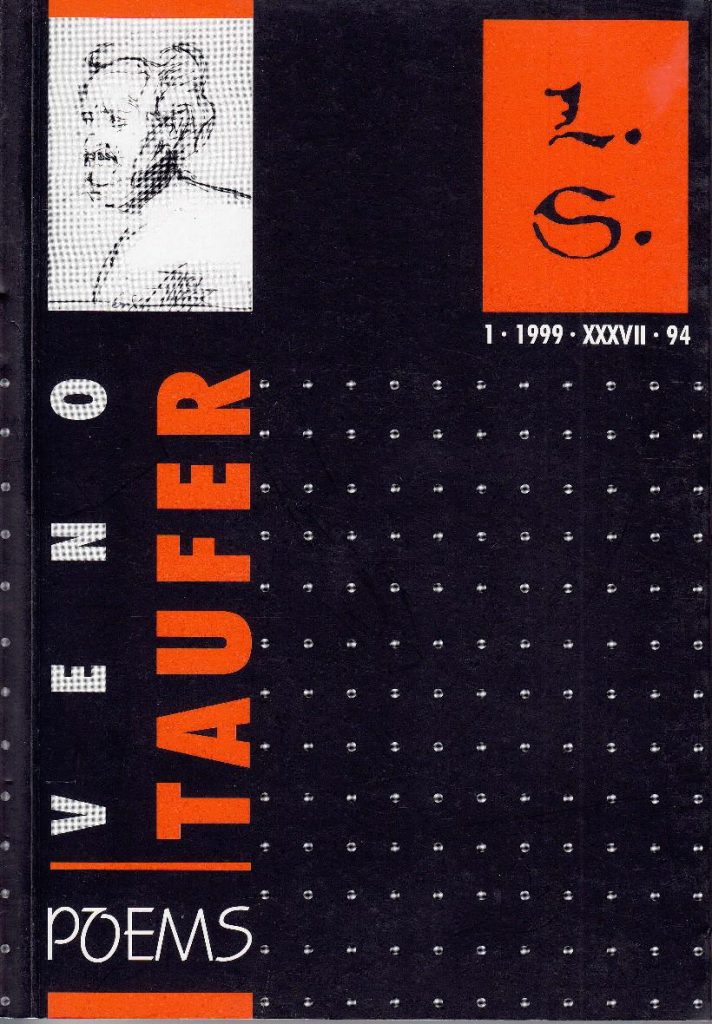 The lyrical oeuvre of Veno Taufer, one of Slovene modernism’s most prominent poets, is characterised by an internal singularity of commitment to language, which in his poetry acts not merely as an instrument or means of expression but becomes reality itself, fragmentary rather than monolithic. Time and again in his work, Taufer proves poetry can shake any dogmatic “truth” of the world to its core, including truth expressed by poetry – a condition the master craftsman of deconstruction, reconstruction, irony and self-irony is well aware of.

“Veno Taufer’s first collection of poems, Svinčene zvezde (Leaden Stars), was published in 1958. His verses are discussed by literary historians alongside those of Dane Zajc and Gregor Strniša, who like Veno Taufer both published their debut collections in the late fifties. The emergence of these three lyricists represented a significant changing of the guard in the nation’s art, especially in the context of the literary trends from 1945 to the end of the fifties, marking Slovene poetry for the following couple of decades. […]

Taufer’s basic effort is to break through to the mythical-archetypal nuclei preserved in the tradition of folk poetry, whereby he tries to make contact with the universal experience, having been verbalized in the originative, not yet inflated language, accessible inasmuch as committed to. A bulk of Iinguistic material must be crumbled and clawed through: but it is still the voice of modernism that forms, moulds, organizes, and “sends on” this material. […] Taufer’s poetics is the poetics of a fragment. Fragmentizing the world and language is inherited from the paradigmatic gesture of modernism: recognition of any (‘traditional’, ‘metaphysical’, ‘classical’) totality is deceptive”, writes Matevž Kos in the preface to the selected poems of Veno Taufer.

Veno Taufer was born in 1933 in Ljubljana, Slovenia.  He is a poet, playwright, essayist, translator. In 50ties and 60ties editor and contributor to some literary magazines which were banned. In 1985 he founded the International Literary Festival Vilenica, an important engagement for the democratization in Central Europe.1989  was co-founder of the first Slovenian democratic party and co-author of the 1989 May Declaration, the basic document of the pluralistic democracy and independence of Slovenia.

Taufer has published 17 poetry collections of which the first one, Leaden Stars,1958, had to come out as a “samizdat”. The latest were Flakes, 2000, Beseechings, 2003, Letter in a Bottle, 2006. This year in the early autumn are coming out his Collected Poems. He is author of several books of plays and books of essays and translator of more than fifty  books of poets ( T.S.Eliot, E. Pound, Wallace Stevens, G.M.Hopkins, Ted Hughes etc.)