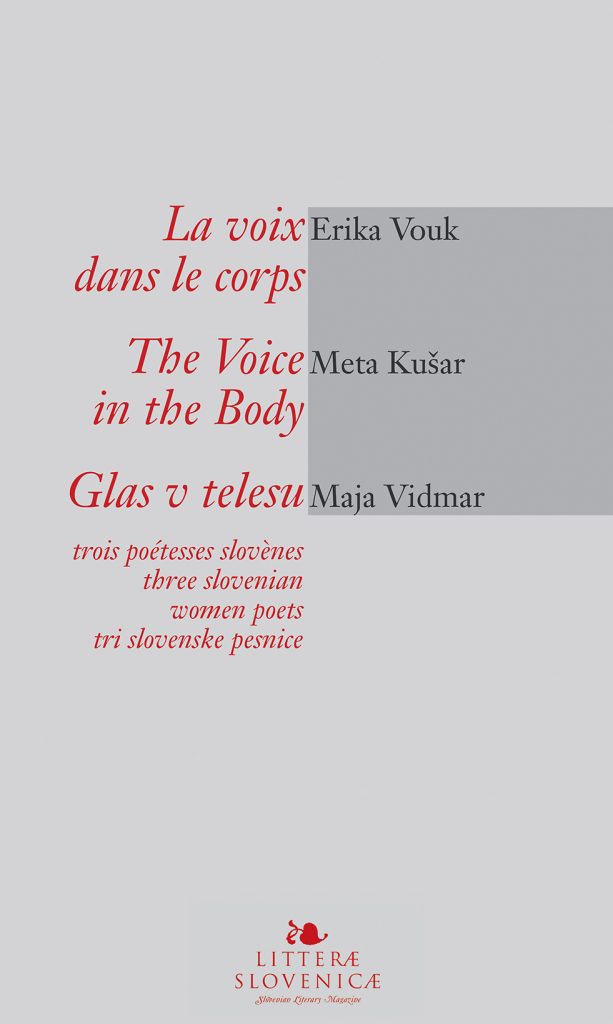 Facing the tumults of life and love, Meta Kušar draws on her pride to hold ground. By remaining accustomed to royal fabrics even in a barbarian’s world, by dismissing trifles with sophisticated gestures, she resists the dulling impact of stark reality. Her attitude is contrasted by the fragile certainty of existence maintained by Erika Vouk in her poignant confrontations with death. The trio, a chorus of voices crystallizing into an authentic reflection of the Slovene cultural milieu, is completed by Maja Vidmar. With the courage of an Amazon she sets out to shatter the universal standard, the ‘everycouple’ compelled to enact its drama trapped in a bell jar.
Three facets of poetic writing, three women’s faces, but also, and perhaps above all, three distinct breaths subject to form to manifest word. “The three, each etched by different experiences and steeped in their own style, come together by that ancient theme common to literatures of all ages: the song of love, veiled, in this case, in solitude. Perhaps, it is the solitude of withdrawal, like that of Erika Vouk; solitude as the choice of spiritual freedom, as in Meta Kušar’s echoes; or the anxiety-inducing solitude within a relationship, such as ripples in Maja Vidmar’s poetic mirror. Different solitudes of that contradictory being, woman, that convey the unease of our time – a lack of hearing and listening, an essential quality these sonorous carvings seek to restore”, points out Barbara Pogačnik in her preface to the book.

Meta Kušar was born in 1952 in Ljubljana. She is a poet and essayist, the author of six books of poetry: Madeira (in bilingual editions: Slovene-English and Slovene-Italian, 1993), Svila in Lan (Silk and Flax, 1997), Ljubljana (Ljubljana, 2004), Jaspis (Jasper, 2008), Vrt (Garden, 2014), winner of the Veronika Award for best poetry collection of the year, and Azur (Himmelblau, 2015), a Jenko Award nominee. Her poetry collection Ljubljana was published in Slovakia (Ars Publications, Bratislava, 2008) and in England by the Arc publishing house, with Polish and Serbian translations following in 2013. Meta is also the author of a book of interviews titled Intervju (Interview, 2009) and an essay book titled Kaj je poetično ali ura ilegale (What is Poetic or a Lesson in Illegality, 2011), winner of the Rožanc Award for best essay collection in 2012. Her work appears in various anthologies: Afterwards, Slovene Writing 1945 – 1995, The Fire Under the Moon; Contemporary Slovene Poetry, La voix dans le corps/The Voice in the Body/Glas v telesu, Les Poètes de la Méditerrané, Gallimard to name the major ones, and in numerous literary magazines. Since 1980 she has regularly contributed cultural and historical shows to the Slovene National Radio and the RAI-Trieste. On occasion, she writes film scripts and directs them. She also directed a musical performance of her poetry, The Throne of Poetry, staged internationally in Washington (1999), London (2000), and Lugano (2006). Recently she has authored and staged a number of multimedia literary events; the latest one dedicated to the poets who passed away in 2016 (Cankarjev dom, Ljubljana).

END_OF_DOCUMENT_TOKEN_TO_BE_REPLACED

Poet and translator Erika Vouk lives and works in Maribor. Her poetic oeuvre consists of eight poetry collections: The White Eurydice (1984), Anima (1990), The White Tree (2000), Description of a Painting (2002), Album (2003), Wave Motion (2004), Ruby (2008) and Lasa pur dir (2013). In 2007, her selected poems were published under the title A Hand Painting with the Swing of a Bird’s Wing. Erika Vouk authored a wealth of translation, especially in the domain of drama (Frank Wedekind, Johann Wolfgang von Goethe, Heiner Müller), with her foremost work being Goethe’s Faust: The Second Part of the Tragedy. Her poetry and youth literature translations appeared in a diverse range magazines and journals. In 2002 she became the Dame of Poetry at the European Poetry Tournament, as well as having received the Jenko Award for her poetry collection Description of a Painting, followed by the Veronika Award for the same piece in 2004. Erika is a recipient of the Glazer Award of the City of Maribor for lifetime achievement.