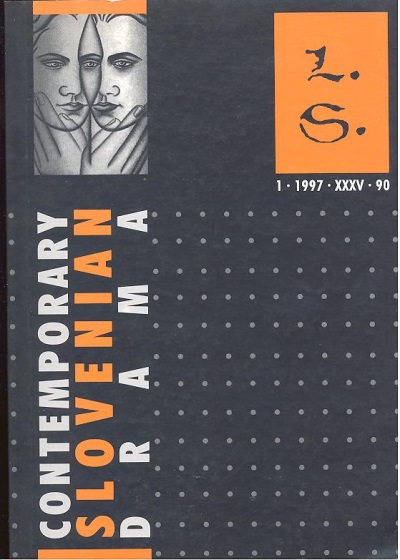 The volume Contemporary Slovenian Drama includes a selection of six distinctive examples of contemporary Slovenian drama in the eighties and the nineties. The six authors represent the core of current Slovenian wring for theatre […]. The selection provides a realistic and vital insight into contemporary Slovenian playwriting. Without significant reservations, the six selected plays – two of which date back to the eighties (The Wedding and The Great Brilliant Waltz) – can be read as the most characteristic examples of Slovenian drama in the period of transition. Slovenian society – and consequently in Slovenian literature – the late eighties and early nineties were the period of the inevitable final break with the political and social tradition of living in the federal community of socialist republics of the Yugoslav state. The transition period is characterised by at least two important components. Firstly, phenomena of this period lack a clearly distinct form – at times they seem to replicate themselves and sometimes the contours seem to vanish. And, transitional phenomena are marked by some kind of inner feeling of instability, disorder and even panic. These could be the identifying features of phenomena that correspond to the definition of transition in rhe corpus of Slovenian drama during the second half of the eighties and the first half of the nineties. Although in most of them we can find elements that defy such definition or are contrary to it, their common denominator is quite clear and refers to the relationship between drama and the politics of the state. The time outlined in this volume (the earliest play, The Wedding announces the emerging changes, whereas the rest move further away from transition, already showing signs of stabilisation) is also defined as the time of passage from one state into another, of arrival into the new state and in to the time of a new future. The basic common denominator, then, is that of the relationship between drama and polis, while the fundamental components of man’s existence can be inscribed on the background of a new political reality.

From the preface by Blaž Lukan