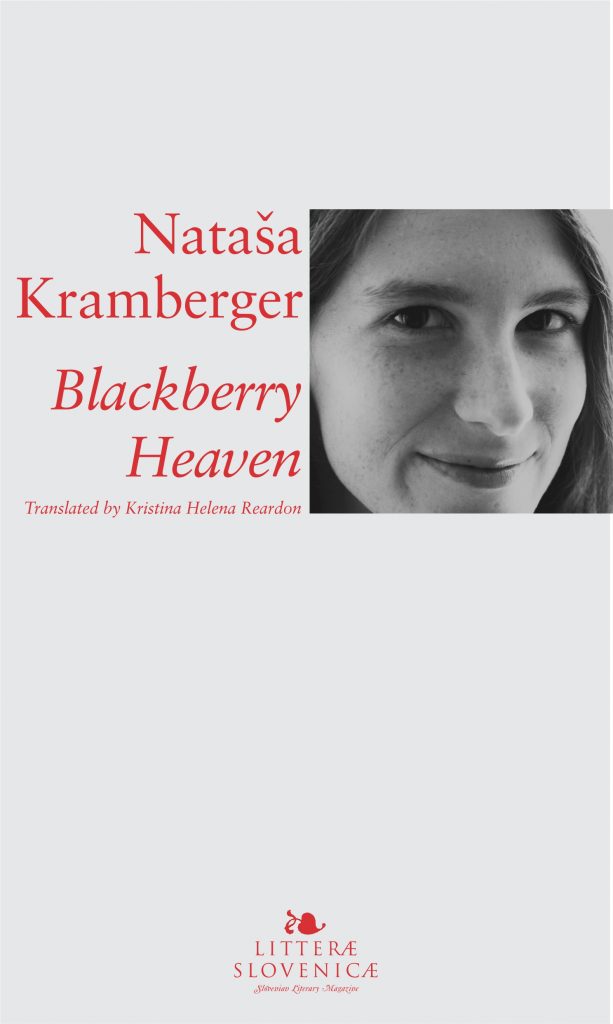 In Blackberry Heaven, a young woman named Jana, who comes from the Slovenian countryside, finds herself in Amsterdam, where she meets Bepi, an old man from eastern Italy who sells live fish at a flea market. They each carry within them a number of spinning, intertwining stories that create a mixture of situations that are by turns funny, peculiar, unpleasant, fairytale-like, and romantic. These stories flow through village figures, urban adventures, and mystical dialects toward a river outlet that which is at once also a new source. Thus, the story of this “river novel” never ends, since the ending of the novel is at the same time its beginning. Nataša Kramberger’s Blackberry Heaven is enlivened with careening rhythms and onomatopoeia. It provides a full-blooded portrayal of the characters in Jana’s hometown, which serves as a contrast to Amsterdam, that city to which the mysterious paths of fate have led everyone from a Surinamese woman working at a cybercafé to the biracial child whom Jana babysits. All find themselves in a city where throaty Dutch names resound even as the memory of Jana’s native Slovenian dialect remains. Nataša Kramberger is known for her use and mastery of many linguistic registers, proving again and again her remarkable storytelling and linguistic prowess.

Additional sample translation of an excerpt of a novel in German

Nataša Kramberger, a writer, ecological farmer and herbalist, was born in 1983 and spent her childhood in the village of Jurovski Dol in northeastern Slovenia. She graduated from the Department of Communication Science at the Faculty of Social Sciences in Ljubljana and continued her studies in Utrecht as well as in Berlin. Her debut novel Nebesa v robidah (Blackberry Heaven, 2007) gained the attention of the critics and was nominated for the Kresnik Award for the best Slovenian novel. It also won the 2010 European Union Prize for Literature. She went on to publish a novel in rhyme, Kaki vojaki (Khaki Soldiers, 2011); a collection of newspaper and magazine columns in which she wrote about her life in Berlin, Brez zidu (Without a Wall, 2014); the poems and fiction notes Tujčice (Catkins, 2014); and the novel Primerljivi hektarji (Comparable Hectares, 2017), which is a partly autobiographical work in which the narrator, after having lived in Berlin, returns to a small Slovenian village and becomes an ecological farmer. Kramberger often mixes the rural and the urban in her work, the realism of the contemporary with the mythologized past, while combining the genres of journalism, essays, and belles-lettres. She spends her summers in the village of Jurovski Dol, where she founded the eco-collective “Zelena centrala” (Green Central) with which she promotes the principles of ecology, art, and social inclusion. She spends her winters in Berlin, where she runs the Slovenian-German cultural association Periskop.

END_OF_DOCUMENT_TOKEN_TO_BE_REPLACED

Kristina Helena Reardon is a writer, translator, college instructor, and freelance journalist. She earned her Ph.D. in comparative literary and cultural studies from the University of Connecticut in 2019 and her M.F.A. in creative writing from the University of New Hampshire in 2010. She held a Fulbright scholarship for translation in Slovenia in 2010–2011 and during that time co-translated several short stories written by women that have since been published in World Literature Today, Words Without Borders, Slovene Studies, and other American journals and magazines. A part of her doctoral dissertation, which focused on humor during the First World War era, was awarded the Rado L. Lencek Graduate Student Prize from the Society for Slovene Studies in 2018. Her own fiction has been published in several magazines, including The Adirondack Review, and since 2015 she has worked as associate director of the Center for Writing at the College of the Holy Cross in Worcester, Massachusetts.