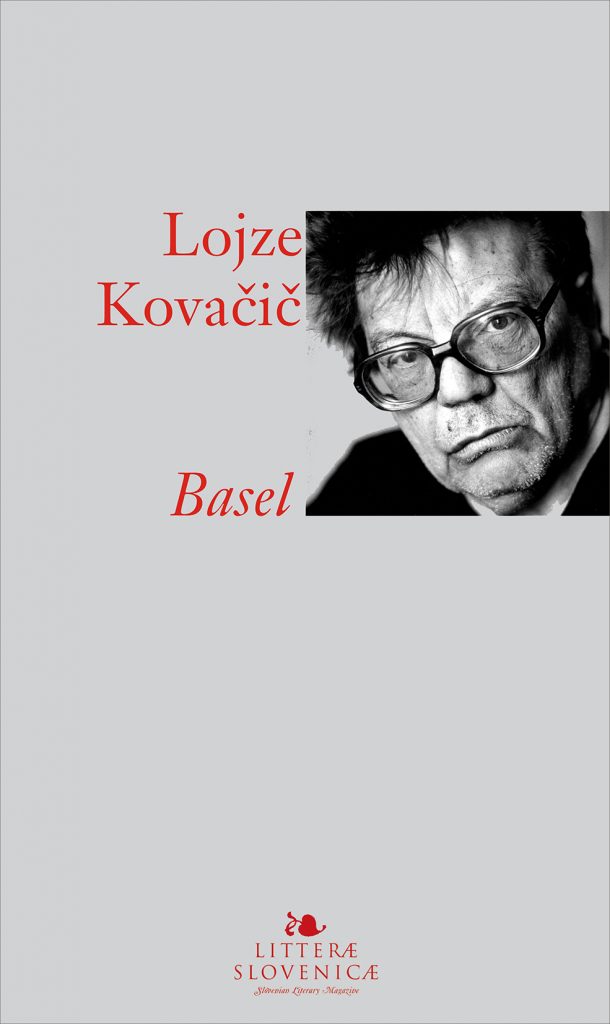 The prose fragment Basel describes a November week in 1972. The main hero and his chosen one visit, for the first time in thirty-six years, his native city of Basel, the city in which his parents, one of the first Slovenian migrant families, lived from 1910 to 1938. For the hero this city, in which Switzerland, France and Germany converge and in which he spent ten decisive years of his life, is more than just a place of birth. It is almost fate itself. Encountering the houses in which he, due to frequent relocating, spent various periods of his childhood, once again seeing the streets, ports, and Basel districts in which the veritable Babylon of the mixed Italian-French-German population is anchored, but especially in reuniting and conversing with the sister who never left Basel, he gradually establishes an image of the time and world of a Europe of yore. Of a bygone Europe that World War II bandied between relatively peaceful times (the diffuse ends of the previous century) and acutely diametrical political poles. In Switzerland, which remained neutral in each of the two World Wars, the image of old Europe is even more noticeable because preserved there are all of the previous values, conventions, attitudes and sensibilities that make the country something of a rare museum of Europe. While the environment the hero confronts after almost four decades away gives rise in him to a clear and sharp image of mutually exclusive episodes of his early life, there is a parallel confrontation in the present, namely between Yugoslavia (that forever restless war country and its many a post-war turmoil no less harrowing than the war itself) and the Switzerland Basel symbolises (which is like a humane, historically and politically fossilised country that is free from turmoil). The hero wants to engage in a double battle: to remain faithful to Europe, this old, decaying Rome on the world map, and simultaneously to account for all its myths and symbols, using those weapons of European provenance: analysis and scepticism.

END_OF_DOCUMENT_TOKEN_TO_BE_REPLACED

Andrej Špendov is a graduate of Slavic studies, a translator, and a musician. He was born in Switzerland, where he also studied. Since 2008 he has been teaching “Religion and Culture” at a high school in Uster/Zurich. He translates from Slovenian (Lojze Kovačič, Lela B. Njatin, Andrej Blatnik, Gregor Strniša) and Russian (Ivan Vyrypaev) into German. With his band “Palma Fiasko Orchester” he has set to music and played works by Kajetan Kovič, Gregor Strniša and others.