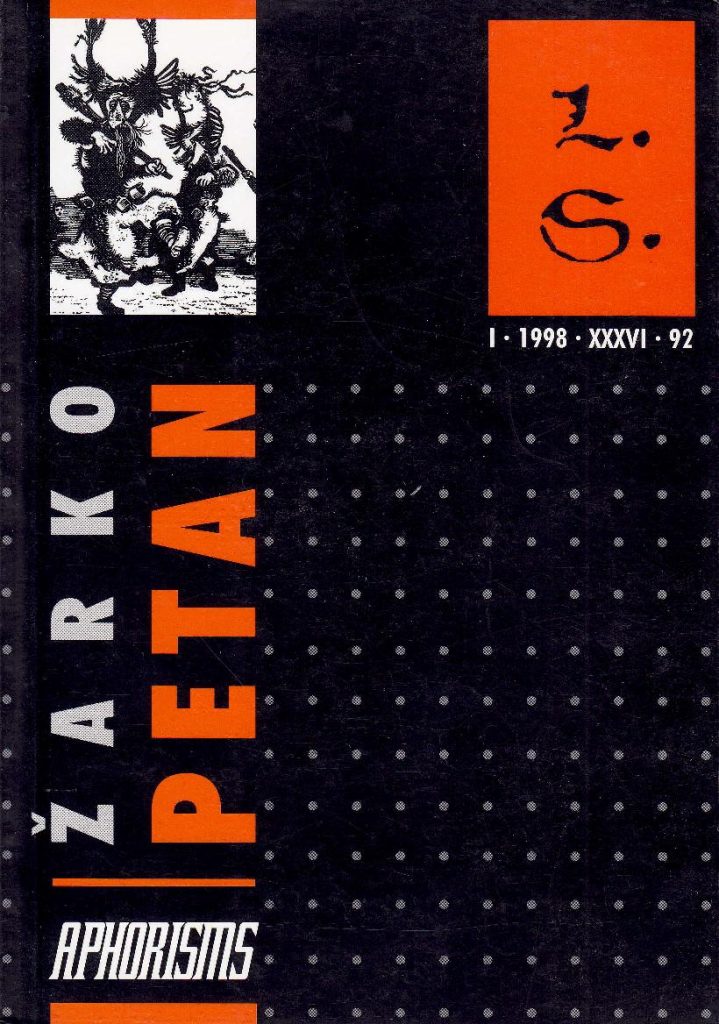 Petan’s most notable and internationally acclaimed form of expression are the aphorisms. In the Enciklopedija humorja (Encyclopaedia of Wit), Petan informs the reader of the number of aphorisms he’s written in the past thirty years – some 5,000 in all, a most impressive figure. As for their literary provenance, Petan states: “Aphorisms do not belong to the epic or the lyrical. They belong to ethics.” Beginning with Petan’s first book of aphorisms, political and social life of the time continued to be his constant source of inspiration. The communist regime, of course, in its endless self-approving, long-winded verbosity and puffed-up self-glorification, watched with scrutiny over any potentially dissenting voices.
Satire was thus in the inner circle of politically suspicious forms of expression. The short, acrimonious and intense ‘reality-check’ nature of the aphorism was perhaps best suited among all the possible responses to the tedious and hollow political speeches of the day. Here is one sharp example of Petan’s politically satirical barbs: “I’ve been asked why I write, and this here is my reply: unfortunately, the pen doesn’t fire bullets.”
Witty one-page photo-caricatures by Stane Jagodič illustrate Petan’s most remarkable book of aphorisms, Pred nami potop (Before Us, the Deluge). The title, paraphrasing Louis XV’s famous maxim: “After us, the deluge”, is an endorsement of the quality inherent in Petan’s work. Perhaps it could best be summed up by the phrase: “new skin for ancient wisdom.” As much as it is distinctly Petan’s, it is also quintessential to the identity of the European culture and above all, to the European literary tradition.

From the afterword by Andrijan Lah

Writer, screenwriter and director Žarko Petan (1929–2014) was born in Ljubljana, spending his early childhood in Zagreb, Croatia. From 1943 up until the end of the war, he stayed with his family in Trieste, returning subsequently to Maribor where he finished his secondary education. He graduated from the Faculty of Economics in Ljubljana, and some years later also from the Academy of Theatre, Radio, Film and Television, majoring in theatre and radio direction. He began his career by writing film critiques, reports, articles and interviews for the magazine Tovariš.
Žarko Petan was one of the founding members of the influential theatre group Stage 57, working as a freelance artist and journalist until his employment as a permanent stage director at the Slovene National Drama Theatre, followed by 21 years at the Ljubljana City Theatre. For nearly three years, he was also director-general of Radio-Television Slovenia. He was a member of the Slovene Writers’ Association, the national PEN Centre and the French Society of Dramatists.
His stage texts saw 33 theatre productions in Slovene theatres and 37 performances abroad, with 77 domestic and 75 foreign radio play productions. The Radio-Television of Slovenia adapted seven of his texts into television films, while another ten appeared on the big screen. Petan’s directorial resume includes nearly 130 stage productions at home and abroad, 25 radio plays by other Slovene and foreign authors, as well as eight film and television adaptations. His extensive oeuvre of work in drama, film and literature brought him over 35 awards.