An Event in the Town of Goga 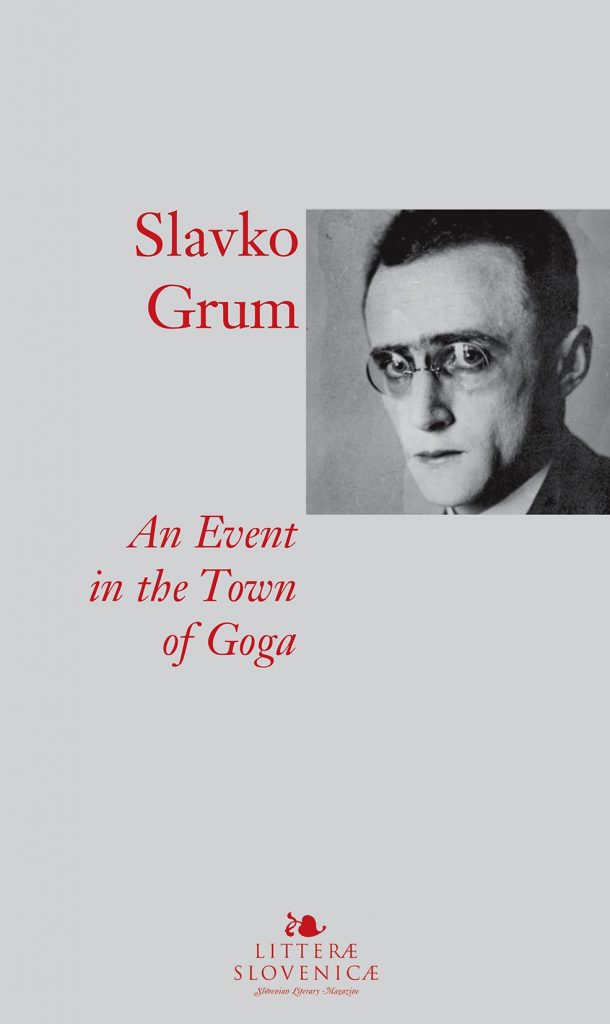 The play An Event in the Town of Goga was published in 1930, debuting on stage in 1931. The interwar period thus provides a cursory context for its understanding. Grum’s work was influenced by four major contemporary figures – playwright August Strindberg, theatre director Aleksander Tairov, psychologist Sigmund Freud and actor Conrad Veidt.
The central protagonist of Grum’s Goga is Hana, the daughter of a well-to-do merchant in a market town. Goga is a crammed little square of slanted houses whose rooms have no front walls. In the home of widowed trader Vajda, festivities are being prepared for his daughter Hana’s return from abroad. The townsfolk, especially the gossipy old sisters Tarbula and Afra, keep chattering about Hana’s potential grooms. Everyone feels like something important is about to happen. Hana, in the meanwhile, is terrified of the house servant Prelih who raped her when she was twelve. When she’s alone at night, Prelih sneaks into her room once more, and she hammers him over the dome with a candelabrum, killing him stone dead … or so it would appear. Somehow, the girl has to get rid of the body. She asks maid Tereza for help but the woman is too frightened, and Hana is compelled to take advantage of poet Klikot who is in love with her. Klikot carries the body into the square, the town erupts into mayhem. Everyone is hysterical, up in arms about something, though no one knows exactly what. Afra hurries over to Elza to see if she hasn’t hung herself. Elza once stole Afra’s lover, the late Erik, and the couple had an unwanted baby. She tried to commit infanticide but Afra rescued the child, giving it into foster care to Ms Prestopil. Elza never forgave herself for the act, and Hunchback Teobald never knew his mother. Afra has Elza in her clutches now: preventing her from revealing herself to her son or seeking salvation in suicide.
When the townspeople finally discover Prelih’s body, massive excitement ensues. It quickly wanes, though, as he begins to stir from his torpor. Unfortunately, he’s still alive … He remembers nothing. Hana is free, she decides to return abroad. The townspeople keep on waiting and waiting, waiting for their redemptive event, but nothing seems to be happening. — The End. — As the curtain rises, everyone is at their usual place. Prelih stands over Hana who is desperately struggling to push him away.
When it was first performed, An Event in the Town of Goga was met with reservation. Essentially, the problem was that Grum’s play failed to meet the moral standards of either the liberals and leftists on the one hand, or the Catholics on the other. It wasn’t concerned with promoting either national liberation or Christian ethics, and as such did not serve the political interests of the major powers. After World War II, however, attitudes to the play changed dramatically, and Goga eventually became a standard negative trope in the domestic social discourse, a testimony to the self-destructive potential within the Slovene collective consciousness and, as such, an important part of the national mythology.

Slavko Grum was born in 1901, in the village of Šmartno pri Litiji. The family soon moved to Novo mesto, the chief city in Lower Carniola (in southeastern Slovenia), where Grum attended the Franciscan primary school and academic high school. In 1919 he went to Vienna to study medicine. There he became acquainted with the psychoanalytical theories of Sigmund Freud, as well as the modern avant-garde theatre (especially Max Reinhardt’s production of Ibsen’s Ghosts and Aleksandr Tairov’s production of Wilde’s Salome), both dramas were enormously influential for Grum’s own playwriting. He completed his medical studies in 1926 and returned to Ljubljana, where he worked for three years at various hospitals. He was employed as a doctor in a hospital for women’s sickness and at the psychiatric clinic, and it was there that he obtained material for writing his most important works, including plays. He had a strong professional interest in psychopathology and also lectured on psychoanalysis.

Grum’s literary output was relatively meager, consisting of a few plays and a number of short “sketches” published in Ljubljana periodicals. Grum’s plays are the peak of Slovenian expressionism. While studying medicine in Vienna from 1920 to 1927, he wrote four plays that were most original in terms of both content and style; these plays, which has a bitter poetic air to them, are also imbued with spirit of a dire social situation and the tragedy of the gloomy vicissitudes of the present.  His critical reputation rests wholly on the play Dogodek v mestu Gogi (An Event in the Town of Goga, 1930), which won a prize from the Yugoslav Ministry of Education for the best original Yugoslav play.

He died in Zagorje of liver cancer in 1949, the day after his forty-eight birthday. It is after Grum that the “Grum” Award for the best Slovenian play script is named.