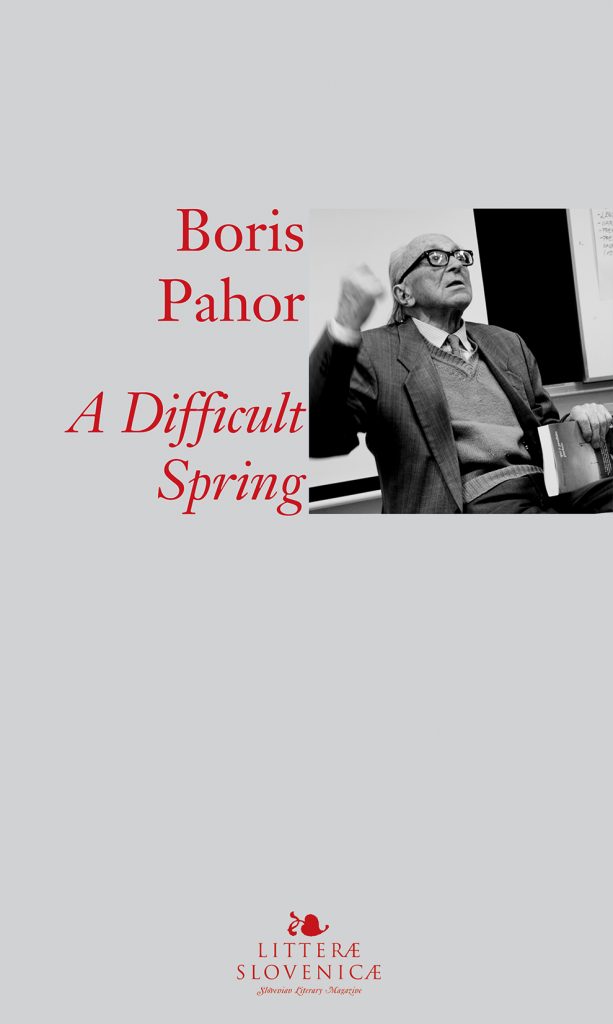 After World War Two, a train carries the physically and spiritually broken people who were taken from all over Europe to the German concentration camps back through the Netherlands to a sanatorium in Paris. The Triestine Slovenian, Radko Suban, who has behind him not only the destruction of the camps, but also terrible experiences with Fascism, is also taken to the sanatorium when a doctor discovers a shadow on his lungs. In the camps, Suban had worked as an orderly, and, with an ever-smaller group of people, had carried the dead to the ovens of the crematorium.

At the sanatorium, he falls in love with Arlette, a twenty-four-year-old French nurse who embodies the future, love, and indeed life itself. With her, he experiences occasional moments of romantic intimacy that he had almost forgotten could happen, and enjoys the embrace of the nature around the sanatorium. Because of their different views on the world – Radko’s having been formed above all by the cruelty of the camps – they frequently argue and begin to despair about the relationship. In the letters addressed to Arlette and in his reflections, Radko ponders his own psychic destruction as a result of the torment of the camps; without Arlette’s help, he is incapable of loving and understanding the world beyond the camps.

While living in the sanatorium, Radko and the other returnees also discuss current political events, which each of the patients interprets in their own way. They pass the time by telling the tragic stories that they have experienced. Radko travels to his native Trieste to visit his mother who is scheduled to have an operation. Arlette promises that, despite pressure from her family to marry a wealthy man in the village, she will wait for him and will one day join him in the Trieste, that Radko has so lovingly and picturesquely described.

Boris Pahor was born in 1913 in Trieste, Italy. He is one of the most prominent members of the Slovenian Academy of Sciences and Arts and among the most discernible Slovene authors abroad. In 1920 he witnessed the arson of the Slovene culture centre Narodni dom in Trieste. During the Second World War he joined the National Liberation Movement and spent the last year of war in the concentration camps Natzweiler-Struthof, Dachau and Bergen-Belsen, which eventually proved to make a crucial impression on his literary work. Among the author’s most distinguished works are: Mesto v zalivu (The City in the Bay, 1955), Vila ob jezeru (The Villa by the Lake, 1955), Kres v pristanu (The Bonfire in the Quay, 1959) Parnik trobi nji (A Steamboat Blows to Her, 1964), Nekropola (1967; Pilgrim Among the Shadows, Eng. trans. 1995, Necropolis, Eng. trans. 2010), Zatemnitev (Twilight, 1975), Spopad s pomladjo (A Difficult Spring, 1978), V labirintu (In the Labyrinth, 1984), Dihanje morja (The Breathing of the Sea, 2001), and the autobiography  Moje suhote in njihovi ljudje (My Sanctuaries And Their People, 2008). His books have been translated into Italian, French, German, Croatian, Serbian, Hungarian, English, Spanish, Catalan and Finnish. Pahor has been a candidate for the Nobel Prize several times. In 1992 he received the pre-eminent Slovene national prize, the Prešeren Prize, in May 2007 he was awarded the famous French National Order of the Legion of Honour and in 2008 he was given the “Dove of Peace,” a special tribute of the international prize Viareggio Versiglia. Boris Pahor, who survived the fascist persecution, the Nazi concentration camps and advocated the need for a democratic Slovene state after the war, is also a fervent fighter for the rights of Slovenians living outside the borders of Slovenia.